A couple of entries ago I mentioned that our fresh water pump had died while we were in Canada.  I replaced it on returning home and thought all was well again. Unfortunately our troubles continued when we attempted to run water for washing dishes one night.

We had turned on the AC water heater circuit breaker to heat up some water. When it came time to use the system it ran fine for a few minutes but then suddenly the water from the tap stopped coming out. Odd!

I returned to the boat a day or so later and checked the water again and it ran and ran just fine. What I didn't do was try and use the hot water system again. So I figured problem solved.

We had fresh cold water after that but didn't attempt to make or run hot water. One day I decided to try and heat some water in the tank again just to see if it might work. After a while I went into the shower to bathe only to find---no water!

I suggested Leslie turn off the hot water breaker. She did. Still no water. She then turned off the fresh water pump breaker, then flipped it back on. Water came out of the shower just fine including hot water.

So, apparently we have to recycle the fresh water switch to make water come out. But why is this happening?

Next week we have a technician coming out to try and answer that question.

He will also be installing our new diesel heater that has been sitting in its box in the garage for nearly a year.
at 3:42 PM No comments:

I have long had an interest in my family’s history, our genealogy.  I’ve done a far amount of research and documentation of family members and found quite a bit over the years. My interest stemmed from my association with the LDS, Mormon church while growing up. The religion emphasizes the importance of genealogy for reasons I won’t bother with here. For me, those reasons are of no importance. My interest lies simply in my love of history and interest in the stories that I believe everyone has given the opportunity to tell it.

So, here I just want to deposit the facts of my family; their birth, death and any other facts and recollections I have about them.

My paternal grandfather was Arthur Lee Cone. He was born September 21, 1898 and died November 12, 1977, in Taft, CA. He was married twice. His first wife was Madeline Elizabeth Cone (Cottey). She was born July 1, 1903 to parents John Malcolm Marion Cottey and Agnes Irene (Gaupp) Cottey  She died January 10, 1957 in Taft, CA. Sadly, she passed away of cancer when I was only four so I have no real memory of her. She was the mother of two children, Arthur Jr. who passed away early in his life as a result of appendicitis, and my father,Alfred Russel Cone, born 28 March 1925 in Fresno, California, though I was always told he was born in Coalinga, California. He died 16 January 1975 in Merced, California.
Grandpa remarried the widow of a good family friend whose husband had passed away around the same time as grandpa's wife. Her name was Zola Myrtle Johnson (Nee Cone, Nee Johnson, Nee ???). She was born October 25, 1903, and passed away November 2, 1983 in Bakersfield, CA. She was the grandmother I remember. Grandpa and Grandma lived in a very modest home at 915 Wood Street in Taft, California, a small oil town in the desert south west of Bakersfield. The home was Zolas and grandpa moved into her home after they married. He sold off his home which was a few blocks away on Eastern Avenue. Hers was by far the nicer of the two homes. I've looked at the home using Google Maps recently and it is only a shadow of its former self.  Though it was a very modest home it was well kept. Today it is a ramshakle dump of a place as is the entire neighborhood. It is in a part of town now where it isn't advisable to venture.
Grandpa worked as a machinist for the Shaffer Tool Works in Taft. I visited him many times in the hot and dirty building where he turned out tools and parts for the oil field operations. I remember him washing his hands in the sink against the back wall with Borax Soap, a gritty, white substance that rubbed into his forearms and hands would, after much scrubbing, render his hands clean enough for him to head home for lunch or at day's end. Lunch was signaled by a siren which sounded every weekday at noon.
He regularly came home for lunch which grandma always had waiting on the table when he walked in. It was, at least whenever our family was visiting, always a plate stacked with bread, another with sliced tomato and lettuce. A bowl of potato chips. A jar of pickles and always, ALWAYS, grandpa's favorite German-style mustard.
If it was a weekend or possibly a weekday early evening (if there was enough light) we enevitably visited the Taft Gun Club site out on the edge of town. The range was a very rough set of benches and metal roofed spots where you could set up your guns out of the sun. Aside from that, it wasn't much.  But we would almost always head there at least once whenever we were in town visiting.
Grandpa would load up in his tan VW beetle, whatever weaponry he had in mind for us to shoot that day and off we drove. Grandpa was a life member of the NRA and an excellent marksman, having won scores of competitions. However, he never shoot at anything other than the paper targets he lined his garage workshop with. His trophies and medals lined the walls and shelves in his bedroom.  When grandpa died, all his guns, and there were many, were my inheritance. I took them home with me and promptly gave them to my brother. I wanted nothing to do with guns in my home.
Grandpa was one of the smartest people I've ever known, despite his only made it to 6th grade. He was largely self taught. He loved to read, especially about the wide world. He had stacks of National Geographic magazines around his bedroom as well as Time Magazine which he read from cover to cover. He was alo a music lover, especially Opera and brass band music. He loved Souza marches and also enjoyed Russian Army Chorus recordings. He listened to the Texaco Metropolitan Opera performances on the radio. He was a fascinating man who did not suffer fools. He swore like a trooper sometimes, god damning this or that whenever the spirit moved him. But I loved him.
Grandma Zola worked for the Taft Driller, the local newspaper, in their bindery. She also smoked like a train which didn't thrill me but it was the way things were in those days.
I loved visiting their house. There were always cookies in the cookie jar, a rotund ceramic jar with various cookies displayed on the outside and a lid with a walnut for a handle. It sat on a counter just to the left as you entered the kitchen. Also, always of interest to me was what grandpa kept on the shelf in the cabinet right above the cookie jar. A box of boxes of Clorets gum sat ready for grandpa to grab whenever the box in his breast pocket became empty. Each box was opened on one corner with an opening large enough to allow only one of the small green rectangular pieces of gum to fall out in your hand at a time. 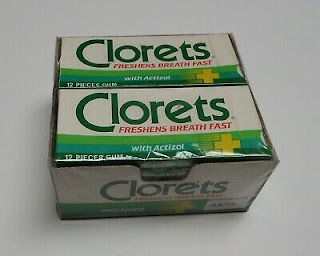 Grandpa would always make sure my pocket had a box in it when I came to visit.
I worshiped my grandpa. I learned a lot from him. A few things my mother wished I hadn't. One family story has it that one evening at the dinner table, a bowl of spinach was being passed. When it arrived under my nose, I made it clear I didn't want any. My mother kept insisting that I had to have some. Finally, exasperated, I declared I didn't want any god damn spinach! My mother blanched and began to cry. Grandpa nearly turned himself inside out trying to keep from laughing. Mother jumped up and ran off to her room my father right behind. The point here is that I learned my inappropriate language skills from my grandpa who quite regularly sprinkled his language with such words. If it was good enough for him, surely it was for me. I soon found out otherwise. 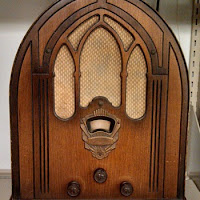 Grandpa and Grandma Zola had seperate bedrooms with grandpa's room in the back of the house. They shared the ony bathroom in the house which was a walk-through type with doors into each of their bedrooms. Grandpa's bedroom held a writing desk, bookshelves, his double bed, a chest of drawers and an armoire which stood in one corner. Covering the entire wall facing the foot of his bed was his collection of rifles, some dating back to his own grandfather who was a gunsmith. There were muzzle loaders, flintlocks and caplocks, all kept in firing order by grandpa's meticulous care. In one drawer of the chest of drawers were the hand guns he owned. Ammunition was all stored out in the garage/workshop. It had long ago stopped being a garage. It was where grandma did her laundry and where grandpa had his shop that included a metal lathe, equipment for making his own ammunition, a well-lit bench just inside the door and up on the top shelf, was an old cathedral style table top radio. When he turned on the lights in the shop, the radio always came on. I was always fascinated by that radio. After grandpa passed away, grandma, who knew how i felt about the radio, made sure I received it. It sits on a shelf in our family room and still works.

When visiting grandma and grandpa, us kids were often sent outside whenever it wasn't too hot. We wandered around observing the strange pepper trees and oleander shrubs.  We were warned not to mess with the sap from the oleander as it was poisonous.

Probably the strangest thing we spent time gazing at were the little cone-shaped pits in the sand. Ants would occasionally tumble into one of these and try as they might, the slippery slopes would only cause them to slide to the bottom of the pit where Ant Lions lurked under the pit. When an ant came close, the ant lion would stick it's madibles out and grabbing the ant, drag it under and devour it. Eek! We would watch these creatures for what seemed like forever waiting for the next macabre event. We never dared stick our fingers into the pit for fear of what might happen to us.

Another activity we enjoyed was going to the public pool at the high school and to the youth center downtown. The youth center was really cool. It had a bowling alley, ping pong, roller skating, even an ice cream shop complete with early rock and roll blasting from the juke box and black and white photos of the hearththrobs of the era.