Sea Strainer and Other Projects

Aboard the Key of Sea for the first time in a month. Taking on a couple of projects thanks to my stalwart mechanic, Jared. He’ll be replacing coolant hoses he discovered had pin holes in them, repairing some minor oil leaks, replacing the intake hose for head and output hose for the bilge system, both of which were very worn AND, drum roll please.....replacing all the hoses on the head, the macerator and the hand pump on the head. Woo-Hoo! Hope to be finished up this weekend.

The sea strainer project is about done and ready to install when I find out the nuts pulling the top and bottom of the strainer are missing. Need new nuts! Then, ready to reattach the unit to the bulkhead we find out the piece of plywood (can't tell you how much crappy plywood is used in these old Bayliners) the unit is attached to is rotten. A piece of starboard is purchased and voila, the job is done.

Interesting! No mechanic ever aboard our boat has ever caught this problem and yet there it is, plain as day. Pin holes at regular intervals along both our coolant hoses complete with tiny drips of coolant coming from each tiny hole. Not enough to cause any damage or even noticeable
when checking coolant levels over time. Just enough to make a mess over time that no mechanic has ever picked up on until my new mechanic.

I am hoping the completion of these projects aboard the Key of Sea, aside from the mechanical improvements, will clear up an odd smell that has persisted on our boat since we have owned it. It isn’t, excuse the language, a sewage issue but rather, I suspect, a combination of odors that seem to permeate the boat whenever we come aboard. It seems to improve after we’ve aired it out a bit but ......
I am told by my mechanic that his experience is that smells are always evident on every boat and this is just our boat’s particular smell. But ... having said that he believes the replacement of all these hoses should alleviate much of the smell! From Jared’s mouth to the sea god’s ear!
The Key of Sea saga continues.....so, my mechanic is installing new hoses to the head when he comes across the “Y” valve. He removes the old hoses running in and out of it and on close inspection sees it is cracked and if it had been used one more time it may well have broken completely. Not something you want
to have happen out on the water.

Oh, what is a “Y” valve you ask. Well, even if you didn’t I’ll tell you. It opens and closes off the direction waste from your waste tank goes. When in Canada there are times when the waste tank is full and needs to be emptied. The problem is that many places
In Canada are out of the way enough that your only real option is to pump out overboard. I know, I don’t like it either but there literally are no other options in places that out of the way. So, you turn that valve and turn on the macerator pump and all the waste in your tank is ground and pumped overboard. Once you re-enter the U.S. though, that valve MUST be tied off. If a Coast Guard inspection set so the waste can only go into the waste holding tank. If found otherwise, you are in for a big fine.
No Y valve was to be found the day we needed it. We'd have to wait until Monday to pick one up. The good news is that when the new one gets installed it will be placed further to the stern of the utility tunnel so that when I need to use it I won'thaveto crawl 6 feet back into the tunnel trying to avoid damaging a depth sounder transducer and the macerator pump which used tolie between me and the valve. Now it will not only be attached to the deck but will also be easily accesible. YES! 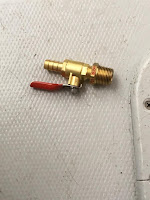 It seems like you do one thing and find another thing needing doing or that ought to be done since you’ve got this or that apart. So, why not install drain valves on both the Key of Sea’s engines to facilitate draining the coolant easier and faster in the future. It’s a simple, easy, quick install and an inexpensive part that will wind up saving you money down the road. So...each engine received its very own, brand spanking new ball valve with one purpose only. Not a new gadget or domewachit that we can proudly show off when guests come aboard. These devices will remain hidden away from view (especially the one on the starboard engine) and only get used the next time we replace the coolant.
So, there you have it folks. A boat buck or so later our boat smells better and and operates more efficiently.