Who knew that I would ever be in a position to join or would ever find myself wanting to join a social club of any kind? Well, it has happened.

As members of the Bellingham Sail and Power Squadron, we have made a lot of friends. Over the past year a number of them have encouraged us to also join the Bellingham Yacht Club (BYC).

A great opportunity opened up about a year ago when most of these friends had joined under a really great deal. The club was looking for new members so for a period of time there was no initiation fee and reduced membership dues. Sweet deal. We passed. We just didn't think the whole social club thing was us. 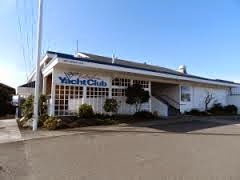 Our friends kept telling us we should have joined. They were having a ball and wanted us to be a part of it.

"It really isn't like what you think," they'd say.  "Everyone is really friendly!"

What finally changed our minds were two things. First, they had another "deal" recently which made joining more affordable. Secondly, we found out about the "reciprocals." For boaters this is a big deal. It turns out that there are hundreds of yacht clubs all over the west coast. Dozens in the northwest. If you are cruising in an area near a yacht club you can tie up on their guest dock for free! No charge! This can save you $50-75 dollars a night in places. In other words, it can pay for your yacht club membership in no time if you take advantage of it. Well, now you have my attention!
Turns out that the folks at the club are friendly, too. Yes, we joined. I'd told our Power Squadron chums that if there was ever another "deal" we'd join. Well, as I said, there was a deal. Not as sweet as the one a year ago but good enough to go ahead and do it.

We've been going to the club a couple of nights a week and meeting up with friends, having a drink or dinner or both and thoroughly enjoying the view from the deck out onto the boat harbor. The food and drinks are cheaper than going to a bar or a restaurant since it is a not for profit establishment. Wednesdays are burger n' brat night. A burger and a brew are only $6. You dress your own burger with all the fixings and toss on a little potato salad and a bag of chips. A couple of times a month is steak night--a huge filet mignon with salad and a baked potato for only $15. You can't get that anywhere for that price and it includes a beer!

Anyway, you can see I am quite taken by the place. It is beautifully appointed inside. I couldn't find a photo anywhere of the interior so you'll have to take my word for it. The bar and seating area are warm and inviting. There is a laid back feel to the place. A side room has overstuffed chairs and a fireplace. At the south end of the bar/dining area is a deck the full width of the building. Any sign of the sun and the deck is the place to hang out with views of the docks and the islands beyond. 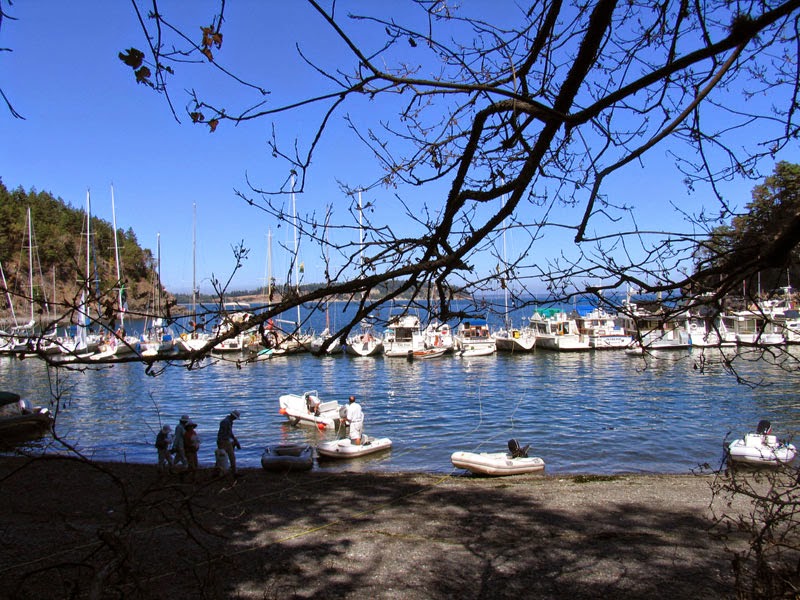 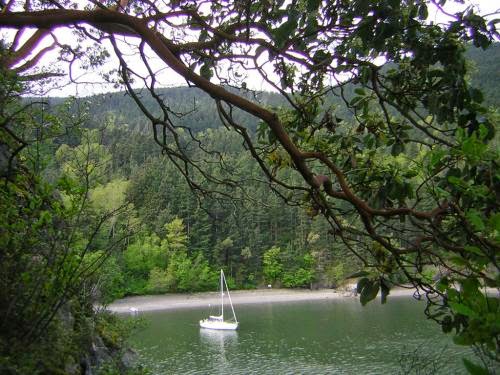 The BYC also owns a beautiful bay out on Lummi Island called Inati Bay, only an hour cruising from Bellingham. It is available for anyone to anchor in but the shoreline is available only to members. We haven't been there yet but plan to soon.


Our trip to Canada will give us the first opportunity to use those reciprocal privileges. We anticipate using them enough to pay for our membership and then some. We'll keep you posted. Tonight . . .is steak night!
at 10:40 AM No comments:

Just when I thought I had everything set with our new Chart Plotter, RADAR and AIS navigation system, for some reason no AIS signals were visible on the chart plotter display. I was assured by friends with AIS systems that I should be receiving signals from several vessels in the harbor area. Hmmmm . . .

I rechecked my connections. Reread the owner's manual. Hmmmm . . .

Finally, I contacted West Marine, the source of all this gear, to ask who they recommended as a technician to troubleshoot the problem. They and my general electrician Mike Heintz both recommended Pacific Marine Electric. Owners Shawn and Jason offered some suggestions by phone. The suggestion that held the most promise required my configuring the chart plotter to acquire the AIS signals by changing the baud rate to a higher speed. Try as I might I could not find the source in the chart plotter that would make this change.

Next day, I called Shawn back and arranged for him to meet me at the boat at 9 the next morning. He arrived on time and, after a few pleasantries, cranked up the chart plotter and AIS to take a look. He did note that the power wire connection I had made was not a real good connection and fixed that, though it was not the real problem (I was getting power to the unit).

Shawn began poking the touchscreen buttons allowing him to go to deeper levels of the software until he found the button he was looking for. BEEP! And on screen appeared a half dozen targets all with the familiar AIS coded symbols. He was done.

I'm feeling pretty embarrassed until Shawn points out that the numerical baud rate button he had asked me to look for a couple of days before wasn't actually labeled that way.

My sheepish look may have had some influence but Shawn decided he just couldn't charge me for just pushing a button.

YES! We visited a little longer and he headed on to his next job.  I sat marveling at the little
orange vessel symbols moving across the display. My new nav system works!

Oh, I didn't mention that the RAM mount I ordered for the new Garmin 740s chart plotter had arrived. Mounting the Garmin using its standard mount leaves it well above my head and difficult to reach. The Ram mount allows me to adjust the entire unit in any direction. Really cool!

The 3"X 24" strips of 3M stenciling paper had been sitting aboard The Key of Sea for a couple of weeks. The folks at Special-T created the series of letters and numbers that make up the registration "lettering" that must appear on both the starboard and port bow of  the boat along with the annual registration tag. The sheet of instructions I was given by Specialty-T were impossible to read and the verbal instructions were of little help. Fortunately the internet had great video instructions. A quick stop at the auto body parts store to pick up a soft squeegee and off I went to the boat. 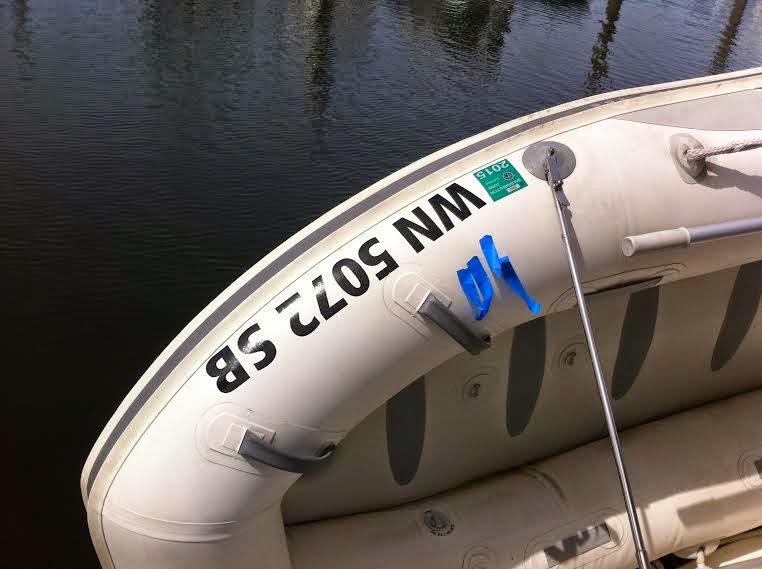 Today was the day. I pulled out the blue masking tape in the parts locker, a pair of scissors and my squeegee.  I applied a piece of blue masking tape along each end of the lettering and one piece down the mid point.

The lettering is carefully adjusted and taped to the side of the dinghy. Pulling away the lower layer of paper towards the middle, I exposed the underlying stencil. Applying the squeegee to the lettering, each black letter stuck to the rubbery hull of the dinghy. Gently pulling back the top layer of paper, the pristine,shiny lettering stood out. All of about 10 minutes and half the job was done.

We're heading off soon on a month-long adventure into Canada aboard the Key of Sea. I'll share more about that in a later blog entry. But we've spent a lot of time gearing up for this cruise. New, upgraded nav gear. Registering the dinghy so it can be used for more than just running from ship to shore, adding a stern tie system and so much more.

We've decided to add a  Man Over Board (MOB) rescue system. We have long considered what the outcome would be should one of us fall overboard and it isn't good. The water here stays around 50 degrees. Being in water at that temperature for only a short time will cause the victim to loose the function of their limbs making self-rescue nearly impossible. 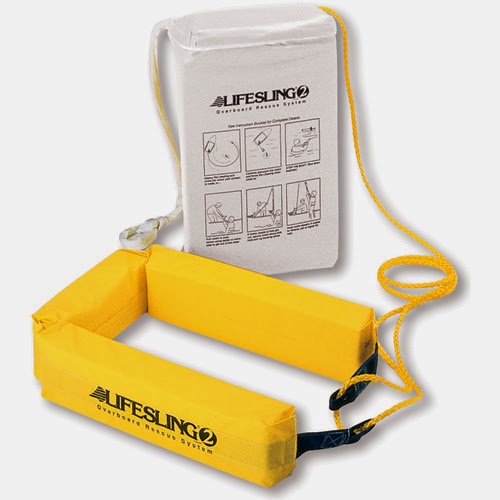 The Lifesling2 with 5 to 1 tackle would enable either of us to lift the other out of the water should it become necessary. All that is required is to get the yellow U-shaped flotation collar to the victim. For that there is a technique which must be practiced to work. The collar is tossed overboard in the general direction of the victim. A long 125' polypropylene line follows the collar out of the storage bag. The bitter end is kept tied off to the boat.

﻿﻿﻿ ﻿﻿﻿The skipper circles the victim with the boat which drags the line and collar closer in until it reaches the victim who must then put the collar under their arms. The skipper shuts down the engines and begins pulling in the victim until they are alongside the boat. The 5 to 1 tackle system is used to lift the victim up out of the water and onto the deck.

The question is where to locate the contact points for the 5 to 1 tackle system to be attached to the boat when it is deployed. I have a buddy who has the system on his boat and has done a lot of practicing using it on the water. He gave me a lot of suggestions for where to install the hardware. Now I'll need to explore the best places on my own boat so the system works most efficiently.