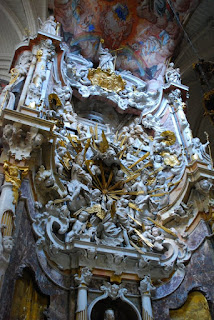 Holy Toledo! Okay, I won't say that again. But this is an amazing city. After breakfast in our hotel, we headed first for the Catedral de Toledo only a block away. No photos! Oh yeah, well how come everyone is taking them? So I did too. No flash, just crank up the film speed and hold on tight to a pillar or pew. I got some great shots. This has to be one of the top cathedrals in all of Europe. I know it is high on my list. Everywhere you look are works of art, statuary, paintings, metal and cloth artifacts, masterpieces all. Point the camera and shoot. You'll probably get a great picture. It's that amazing. 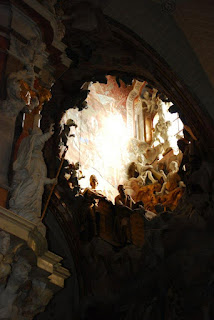 From the carved choir seats, the stained glass, the stunning opening to the sunlight cut through the ceiling to shine down on the people below, past sculptured figures of angels and saints high up in sculpted clouds, it is just overwhelming. The Catholics of that time certainly never heard the words: conspicuous and wealth.
Next we walked over to a museum that seemed to be basically the museum of Toledo. It housed artifacts from the earliest times through to the end of the 19th century. Very nice Roman artifacts, tiles, sculpture, painted planks of wood, sepulchers, plus a large collection of paintings including a number by El Greco, who found fame and fortune here in Toledo.
Lunch was at Restaurante Palacios where we shared a soup called Judias con Perdiz or bean soup with partridge. It basically tasted like our American navy bean soup but had chunks of partridge, a local specialty here. Mostly you picked bones out of your mouth due to the fact that there are more of those than meat on a partridge. Then I ordered my second Cochinillo asado (had it in Segovia if you remember), roasted suckling pig. Leslie ordered Pollo asado. Both were delicious and came with a side of sliced potato in a rich brown sauce. A bottle of so so wine and a bottle of agua con gaz and we were set. Out the door for only €39. Holy Toledo! For lunch? Oops! Said it again!
We wandered a bit more around a couple of other squares before I had Leslie drop me off at the hotel. I need to catch up on laundry before we leave Spain and head for Canada and I have 3 days for it to dry here. We'll go out exploring some more tonight.
Well, my tummy had other plans than to do more exploring this evening so we stayed in and made our plan for the last day in Toledo.
Our final day, we grabbed our city maps and headed off towards the north end of Toledo looking for a couple of mosques. We found the first one which turned out to be an art store selling glass plates and jewelry and playing rock music. The store just happened to be a mosque at one time. Little existed that would lead you to believe it was ever such a thing. Disappointing.
We walked up and down several streets trying to find the other mosque shown on the map but couldn't find it or perhaps we weren't looking in the right street. The city maps are not always very helpful.
Next, we headed off in the direction of the old Jewish quarter. Again, very little exists of that once rather large section of the city. Beginning in the late 1400's the Sephardic Jews were basically given a choice which was to convert to Catholicism or get out of town. Some converted, others left heading to other regions of North Africa, the Middle East and northern Europe. 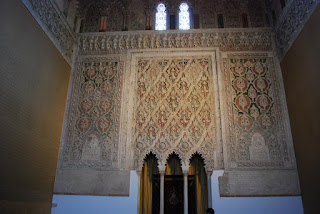 The Sephardic Museum is housed in a former synagogue and parts of the ornate walls and the beautifully decorated ceiling are still in tact. There is also a nice little exhibit of the traditional clothing, jewelry and holy artifacts. I enjoyed the little museum but when all was said and done, I couldn't get over the fact that the Jews and Muslims were treated so poorly by the racist views of the Church that persisted well into the 20th century. After all, the Catholics were killing Jews in the 15th century and the Nazis took over in the 20th. 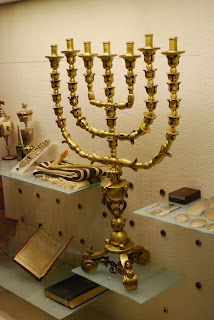 We bought a lovely picnic lunch and took it back to our hotel and ate out on the balcony off the breakfast room with a great view across the rooftops of the city. The sun was bright and warm. We leave Spain with the trees beginning to leaf out, spring flowers are blooming and the temperature, though still a bit chilly at night, is warming up nicely during the day. And we can't help noticing that the crowds of tourists seem to be growing significantly. When we arrived 3 weeks ago, we often found ourselves the lone Americans in a town or village and few others save locals or Spanish and Portuguese on holiday. Even the Brits who so commonly inhabit the the Costa del Sol and the Algarve, were few in number. We really felt like the place was ours. But since arriving in Toledo, the crowds have definitely grown.
My biggest surprise is the growing number of Chinese tourists. Where for decades of European travel it has always been bus loads of Japanese tourists, now the newly affluent Chinese are beginning to discover travel. It is wonderful to see though I recently read that due to the influx of Chinese travelers the prices in hotels has risen as space availability has shrunk due to demand. Still, the more people travel, the smaller the world gets. You can't travel and not begin to better understand other cultures. Sitting in a plaza in Toledo watching a young family playing, a group of old men having a laugh as they argue over a game of bocce ball or groups of young people from different cultures laugh and sing together, you can't help but grow more understanding, tolerant and to realize we are all much more alike than different. 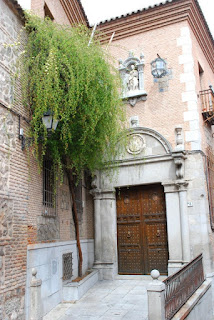 Tonight we went out to rambla through streets of Toledo one last time. Stopped to have dinner in a small square. Restaurante Alcazar turned out to be a good location and good service but the food was awful. Grabbed a fresh hot baguette and a couple of waters in a store on the square and rambla'ed back to the hotel. We are both packed except for the last personal items to go in the bags in the morning. Then we rambla uphill back to the car park and head for Consuegra, heart of La Mancha before going to our airport hotel in Madrid.
at 5:56 PM No comments:

Segovia and The Valley of the Fallen 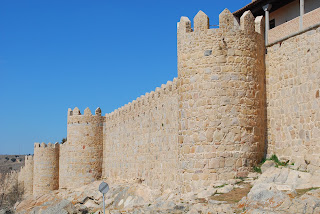