Three boat bucks* later our raw water pumps have been replaced after they began to show serious signs of corrosion and leaking salt water into the engine room. Not serious nor was it something that had to be done at the risk of a sinking boat or even an emminent breakdown, but better to do it now than to be hours or days away from home and have one or both them fail. Had they failed it could have created a more catastrophic engine failure due to over heating or salt water accessing parts of the engines it is not meant to get to. So, we had them replaced. It required replacing the coolant as well which isn't cheap.
We took the pumps off and had the mechanic look inside them to see if it would be at all cost effective to replace certain parts and slap them back on but in the end the labor and parts combined to make it more cost effective and practical in the long run to just get new ones. At $600 a piece it was no small job though the actual installation was fairly inexpensive. Add to that new coolant and you have one pricey repair. Fortunately, the new pumps came with new impellers so that saved us about $75 and our mechanic was able to locate new pumps from a source in the midwest for $100 cheaper each saving another chunk of change. The impeller helps move the salt water (raw sea water) through the engine to keep it operating cooler. They should be replaced annually. 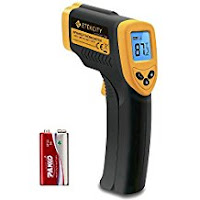 My mechanic asked if I owned an infrared laser thermometer? No! Well, he suggested, you should get one and he proceeded to show me where I should periodically take temperature readings on the engines to make sure they were operating at optimal temperatures, about 160 degrees + or -. So I ordered one from Amazon and it arrived yesterday. It is rated as one of the top 10 thermometers of its type (#2 in the review). So, the next time the engines are running I will be taking their temperature and keepng a running record of the engine temps over time. Luckily I just point and shoot. No rectal probing!
It would seem that I carry so much electronic gear on the boat that it is crazy! I am forever hauling the gear home with me after cruises so that it doesn't sit unattended on the boat.