The Windmills of La Mancha and Alcala de Hanares

La Mancha! Don Quixote, Miguel Cervantes, Dulcinea, Sancho Panza. All names that made the region south of Toledo famous.
Today we decided to make a quick drive through this region before heading back north to the Madrid airport and a flight out to Toronto tomorrow morning. 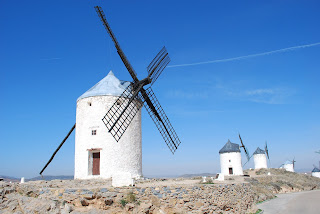 From Toledo there are several drives that take you on journeys through the countryside. We selected the tour through La Mancha that ended in the village of Consuegra, famous for its castle on the hill above the town surrounded by a half dozen white washed windmills of Don Quixote fame. There was quite a drive up the hill to get to the castle and windmills that also offered amazing 360 degree vistas.  At the top the wind howled explaining exactly why these windmills were put here and why the adjacent distant hills sport giant modern windmills providing electric energy for the region. 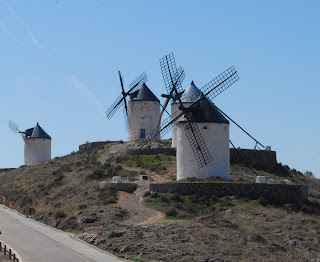 We took lots of photos and walked all the way to the top most windmill before hopping in the car and driving into town. It was a pleasant little town with nothing going on and most everything closed. The church was closed. Nothing to see there. There was a river that flowed through town but it was dry. So we headed out to the edge of town to catch the freeway back in the direction of Madrid. We found a gas station so we filled the tank with only €20 worth as we had prepaid for our fuel at the end of the trip.  So we didn't want to leave too much left in the tank when we turned it in.
On our drive back to Madrid we made the decision to head east of Madrid for another quick stop. This time to another World Heritage site.  Alcala de Henares.
Mora, was our first stop in La Mancha. It turned out to be kind of a dud, so we drove a bit further to the next stop on the tour. The town of Orgaz, yes that was its name, is famous because El Cid was the first mayor. It had a simple but lovely church, a simple square with a restaurant or two and a few shops, all of which seemed closed. Orgaz also sported a rather old bridge that crossed a dried up river. We drove around a bit and then exited the town heading for Consuegra.
By this time we were getting the idea that these little stops in the road were really just a ploy to get people to stay a little longer in the Toledo area and add a bit more to the local economy.
Our stop in Alcala de Hanares was an afterthought. It wasn't a part of the tour but a quick side trip after getting back to Madrid. We still had a few hours to spend before we really needed to get to the airport to return the rental car so we drove on by the airport turn off and about 20 minutes east to this beautiful city.
Alcala contains a major university, The University of Alcala, many historic buildings from the Renaissance era and it is also home to the Roman city of Complutum complete
with it's forum, baths, market and basilica. 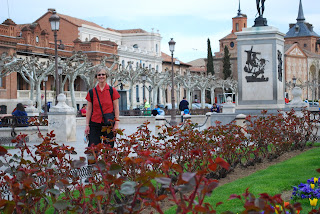 The Archbishop's Palace is where Christopher Columbus had his first meeting with Elizabeth the Catholic and it is where Catherine of Aragon, one of Henry the Eight's wives, was born.
This city is also the birthplace of Miguel Cervantes and where he was baptized. His birthplace is a museum today.
The sad part was when the TI informed us that it was Monday and that the entire town's historic monuments were closed.
We were able to walk around a bit and take in the commercial street and Plaza de Cervantes dressed up in its springtime splendor.
We also had nice views of the mascot critter of Alcala, storks, who built their enormous nests in the treetops and the bell towers all over town. Their curious bill-snapping sound can be heard all over.
The drive back to the airport was a bit stressful but the signage for getting there and returning the car were easy to follow. We had the car turned in in no time and were on a shuttle to the Airport Ibis Hotel within a half hour. Tomorrow we head back to the airport for our flight to Paris and then on to Toronto.
After a restless night at the Ibis Hotel near the Madrid Barajas Aeropuerto, we got a wake up call at 6:30 am. A quick shower, packing the few belongings we needed for the night and we were out the door and to the airport by 7:30. Check in had to be done using electronic ticket machines. Only the business class got to speak to a real person. As we approached the maze of poles and straps that eventually lead to the machines, an Air France employee intercepted us asking if we had carry ons. We indicated that we were carrying on everything. He passed us through to the ticket machines after tagging our back packs.
When we finished with the machines we headed back out but the same guy intercepted us again and told us we had to check our bags. I told him we had made the same flight coming to Madrid and were able to carry on all our luggage. He insisted some airlines have different policies. I countered with, we came on this airline. He didn't want to discuss it anymore so he rudely grabbed my luggage and started rolling it toward a counter where they would check our luggage. The same counter he said earlier we could not go to to check in with a real person.
So, despite the fact that we purposely purchased smaller luggage so as not to have to check our baggage, our luggage is in the hold of the plane and checked through to Toronto. The good news is we didn't have to pay extra for this privilege. More good news. We were seated in emergency rows so we have lots of leg room. Even better is the fact that it is a short flight to Paris where we have to change planes for the flight to Toronto.  We are supposed to be in the two middle seats in a row of four on that flight. That's the bad news.
I was really cranky this morning after not sleeping well, again. When we got to the airport I needed water, coffee and something in my tummy. With that accomplished and an hour of relative peace and quiet sitting, watching out the window as planes landed (doing that gives me endless hours of fascination), I began to calm down. Have I told you how much I hate flying? Next time we take a cruise! Or a much shorter flight.
Flight AF1001 from Madrid to Paris took off and landed on time. We tried to hustle over to gate F54 from F 2, but it turned out to be a long walk interrupted first by a passport check, then another security station where we had to unpack our carry on and go through the now familiar, since 9/11, routine of removing your belt, all the items in your pockets, taking out your camera, lenses, computer and any other electronic gadgets you might be toting. Then, reverse the process and you're on your way. It turns out somehow that Gate F2 is nowhere near F54. The walk between the two was so far you'd have thought you'd walked to an altogether different terminal.
The flight took forever to load due mostly to the disorganized fashion AirFrance did the job.  Then, the pilot came on the intercom to let us know the emergency lighting system was not working so workers came onboard to fix it. We waited for over an hour at the gate before we were cleared for take-off.
Well, that's it. We made it. Lived to tell the story as they say. Thanks for joining me on our adventure. I hope it has been even a bit helpful toward your planning a trip to the Iberian Peninsula. Spain and Portugal are two amazing, not-to-be missed countries. Every region offered special historic delights to see and equally delightful culinary delights. I also hope I have given a few insights that will help you avoid certain pitfalls of traveling. I hope to hear from you with comments about your own experiences or to offer suggestions.
Please join me over the next few weeks as we explore some of the  cities of eastern Canada, parts of Vermont and upstate New York.