We are readying the Key of Sea for her first real cruise of the season. While thee is still much to do, some of the projects I have in store for her this season will just have to be done later since the weather is just not cooperating yet.
I have refinished the flag staff and I have waxed about half of the boat. I am waiting for the weather to improve and then I will finish the waxing.
Collinite No. 870 Liquid Fleetwax Cleaner-Wax is my current choice for getting the best shine I can out of my 1986 Bayliner 3218. She has been through a lot and doesn't shine up the way I am sure she looked in the showroom 27 years ago. But this stuff does put quite a protective shine and the protection the gel coat needs out in the harsh northwest elements. It goes on easily with the help of my variable speed polisher. Then sits on the surface until a haze begins to form. A wipe down with a soft cloth and your done. Repeat this over every fiberglass surface of the boat and your done for the season. It takes a weekend to do but the effort is well worth it.
______________________________________
﻿﻿﻿﻿ ﻿﻿﻿﻿
This is a really cool navigation tool I recently discovered. The Weems & Platt Nautical Slide Rule #105. Oh, sure, you can use the electronics aboard to do all of this and way more, but what do you do when the power goes out? And besides, it can actually be fun to know how to get from point A to point B the old-fashioned way. At least I think so. A good chart,
﻿﻿﻿﻿ 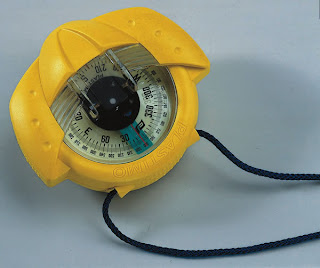 parallel rulers, dividers, a Hand Bearing Compass and this little baby and you are set. 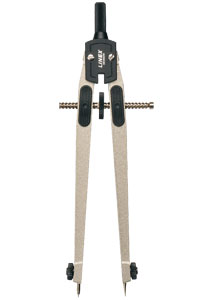 The speed scale reads from 1 to 100 knots or mph. The distance scales are giv en in nautical miles (green figures) or yards (black figures). For example, set 3 nautical miles on the distance line and note that this can also be called 6,000 yards depending on which
unit you are using for distance.


The green distance figures may also be used as statute miles, but in this case your speed will be in statute miles per hour instead of knots. WHEN USING STATUTE MILES THE YARD SCALES MUST NOT BE USED.
EXAMPLES 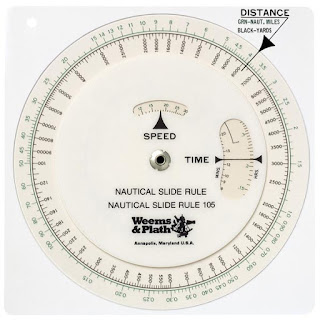 Example #1 To find speed when time and distance are known. Assume that you have run a distance of 12 miles as measured on your chart between buoys and that it took 80 minutes to cover this distance. First, turn the dial until 12 miles is on the DISTANCE line, then turn the inner dial until 80 minutes is under the TIME line. Now read your speed as 9 knots.

Example #2 In this type of problem you know that for a given run your yacht will make a good speed of 15 knots and you desire to know how far you have traveled in 2 1/2 hours (150 minutes). Turn the inner dial until the time is over 2.5 hours. Then turn the two dials together until 15 is opposite the speed marker. Now read your distance of 37 1/2 miles at the distance line.

Our ports of call include a stop on Cypress Island's Eagle Harbor, Lopez Island's Spencer Spit, a couple of days in the Cap Sante marina in Anacortes, a possible trip down the Swinomish Channel to La Connor, then a day or two at anchor in Chuckanut Bay before returning home.

My next blog will include the cruise journal and photos!