Left home about noon today. Our neighbor Steve drove us to the B'ham airport where we checked in, getting through security and finding a seat to await our boarding time. The flight to LAX was a bit rough but not bad. MD80's are noisy beasts and with the added noise of flight attendant announcements broadcast way too loud and  non-stop yaking at the top of their lungs by some folks around us, I finally pulled out my secret weapon for just such situations.  Buy yourself a set of earplugs. Be selective though because they are not all created equal. In they go and problem solved. Ahhhhh. 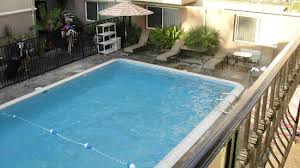 We have stayed at the Comfort Inn Cockatoo about 15 minutes from LAX the last two times we've needed to lay over for a next day flight. It is comfortable, friendly, yes, predictable but it is one of the Choice Hotel chain's gold properties so it is clean and well managed. It includes a nice breakfast in the morning and has a lovely tropical courtyard with a pool.

Both times we've stayed we haven't had a car which in LA is pretty much a problem. The first time there we walked about three city blocks to a dinner spot. But you have to walk across two crazy 6 lane streets. This time we arrived after dark and I just wasn't walking that walk in LA after dark. We decided to order in. Leslie looked over the available options in the area and settled on an Indian restaurant that delivered free. What a nice surprise when the food arrived quickly. It turned to be really good. 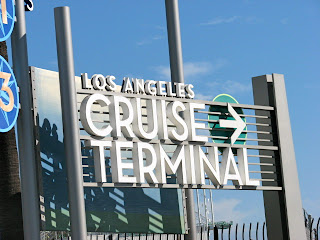 Next morning we had breakfast, finished packing and caught the free hotel shuttle, this time back to LAX where we waited for our Super Shuttle ride to the San Pedro cruise terminal. The shuttle was packed with folks all headed to the same cruise ship.  Everyone was in a great mood looking forward to their two week vacation cruise.

Our driver spotted the ship berthed off in the distance and everyone gazed out the windshield trying to spot it through all the cranes and port buildings. There she was. The M/V Coral Princess shining in the southern California sunshine.

A few minutes later we turned off the freeway and drove the short distance to the pier, first passing the newest addition to the local maritime museum--the U.S.S. Iowa. BB61 sat at the dock a short walk away from the cruise ship terminal. Open to the public for tours, the Iowa looked great in her battleship gray and covered in festive flags and Christmas lights. 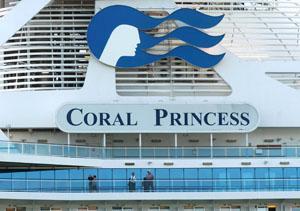 We dropped off our luggage at the curb in front of the cruise terminal. Remember to always take plenty of small bills with you to tip your shuttle drivers (at least a dollar a bag) and the curb luggage attendants.  We'd miscalculated and had nothing to offer the attendant.  Embarrassed, we dropped off our bags and sort of slunk off quickly.

At the cruise terminal entrance we offered out passports and boarding passes as proof we belonged and were directed inside and through a maze of roped off areas to the check in desk. It all went very quickly with no lines at all. We got our boarding cards that identified us and that could be used to make purchases aboard. Then we walked into a cavernous room with hundreds of chairs where we sat chatting with folks around us and waited until our "group" was called to board. Most folks were very friendly and in a jolly mood.

When our group 6 was called we headed onto the ship where we were photographed (one of several times while aboard) and warmly greeted at each step.

My first reaction to the ship was my impression of the decking. The all wood decking was just stunning to look at. She also looked well cared for with very little sign of rust and every surface clean and bright. The interior was tastefully decorated. We especially admired the Wheelhouse bar with its wooden maritime decor.

﻿﻿ Our room, though small was well appointed. I expect small in a boat. I had heard the shower was small and difficult to maneuver in but I found it just fine. Again, I am used to small quarters on a boat. The room also had a flat screen tv, a writing desk, a comfortable queen sized bed, a dressing area with plenty of hanging space for clothes, a cabinet to store other clothes, a safe and adjacent to that was the head.

Domingo, our stateroom steward,  showed up early on to introduce himself and to sort of set the ground rules for what his services included. He was a very warm, friendly Filipino young man that we took an immediate liking to.

We headed to lunch in the Horizon Court Buffet, the only dining room open before we sailed. It was chaos! Crazy crowded. We were offered a plate which was a plastic oval, platter sized. We drifted around scoping things out and scooping dabs of this and that before heading into the seating area where we again found, chaos. We finally found two folks about to leave their spot at the bar and they offered it to us.

As to the food. Ehhh. It was fine. Good cafeteria style. A few salads, several options for mains, desserts, fruit, but nothing that bowled you over.

Finished, we headed back to our room to get settled in. Our luggage had arrived and we needed to get the room ship shape.

We also walked around familiarizing ourselves with the ship. I discovered the Spa and Sanctuary out on the fantail but wondered what the foul smell was. When i got back to the room and opened the door to our balcony, I was really bowled over by the odor. Looking over the side I discovered that a fuel barge was rafted up to our ship.  There was the source of the odor. As the afternoon wore on the smell gave me a headache and the sound of the pumps loading the fuel into the Coral Princess was deafening. I wondered why this hadn't been done earlier in the day.
The fueling process also delayed our departure by about an hour and a half. We'd been sent an email informing us that the ship would be departing at 4:00 rather than 5:00. We didn't wind up leaving until after 5:30. Oh, well, with nothing else to do and no place I needed to be...who cares.

I wasn't in the mood for a sit down dinner nor did I want that much food so we headed to the hamburger bar and grabbed a cheeseburger. Then we parked ourselves in a lounge chair waiting for the Movie Under the Stars to begin. We thought getting out there an hour early would ensure we got a prime spot. Turns out no one was there. It was too cold even with the blankets they provided.

We decided to try out the hot tubs that were also on the deck where the movie was to play. Great idea. So we sat in the hot tub and watched the movie. An attendant even brought us a bag of popcorn. But the hot tub turned out to be so loud we couldn't hear the movie, so we headed back to our room to watch another movie we wanted to see on the cabin TV. My Week With Marilyn was a great movie. Wish we could have seen Men in Black 3 out under the stars but this worked fine.

After the movie we turned in for the night. It was a bit rough for a while during the night according to Leslie but I slept through the entire ride.